by DreamensioN
Haha thanks Cam!

Ok so - I'm here on RedlineAU, but I also run a technical/geek mailing list (with about 70 members) that's been going for 12yrs now.

So first mod - update the bios. Apparently the 5th SATA port on the HP units doesn't run at full speed. A bios updated uploaded here: http://www.multiupload.com/QMDXWV3V16 - will fix that issue.
by German
Showing what people have put in their boxes.

https://spreadsheets.google.com/spreads ... kocJ#gid=0
by Jnr_Zilla
Something to add to Germans list from someone whose done this once already so maybe a little more first hand info and comfort for people shelling out cash for a box then the further hundreds of $$$ to deck it out as the list is long and varied.

Here's a simple list of hardware from umart I got with my first HP. You can cut and paste the names directly into umart and you'll find the products. I'll be going down this path again for the next couple that come along though I'll be trying out WHS, Win7, FreeNAS for a bit of variety and more familiar setup depending on the harddrive requirements for OS as not paying much more for a bigger SSD.

Runs Ubuntu Server with Ryans help but once its setup and a little research I now manage it from a web interface so I don't have to use linux. The vid card fits nicely and possibly the 1Gb version if its not got a passive heat sink will be fine also but 1080p Dolby Digital 5.1 was a breeze for this puppy.

Only thing missing is a Sata cable for the 5th drive to run off the motherboard which I had plenty of from building previous pcs years ago.

Edit: the list above just all bolts straight in with the SSD sitting on top of the 5th drive in the optical drive bay slot with some doublesided tape. You could go down Danny's path and cut into the housing to make it more secure fitting but the drive is light and the tape is strong so it doesn't move.
by DreamensioN
What's the USB enclosure for?

I'm just pricing up all these parts on Umart now.

by Jnr_Zilla
The enclosure is for the SSD drive that sits on top of the 5th 2Tb drive. 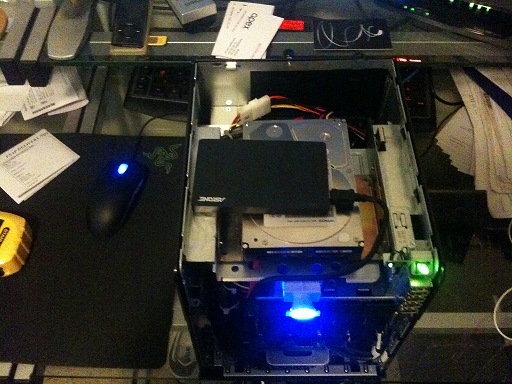 by German
Why have you chosen usb instead of sata connection for the ssd, or am I missing something?

Things to note, the drives at the top will run HOTTER as they're practically touching eachother. Tests with 7200RPM showed +10 degrees on the drives in the SATA Bay. With coolspins, I doubt there will be much difference though and would be inclined to do it.

With this setup, you will also need to get an ESATA -> SATA cable and run it from the outside, into the case (via the slot above the PCI-E expansion cards) and up to the drive at the top.

That gives you a total of 12TB using 6 x 2TB drives. Obviously 18TB with 3TB drives

You can then still run a USB memory stick as the root drive or 2.5" SSD via USB drive converter.
by spitex

German wrote:Why have you chosen usb instead of sata connection for the ssd, or am I missing something?

There's an internal USB connector which gives you the ability for a 7th drive.

SSD on the USB interface is better than USB flash because USB flash drives are typically VERY slow. Fine for a 100% NAS build that doesn't get tinkered with or moved but if you want to RDP to it, or use it a bit you will get much more joy from the SSD via USB. You can use a mechanical drive if you wanted too with a USB->Sata case it just generates more heat.

This allows you to run 480mbit/s (50mbyte/s) off your SSD drive for your operating system which is heaps of speed.

30GB is an awesome size for a system drive too. If you went mechanical you would get 500GB for the same $$.
by DreamensioN
Front LCD display (if you absolutely, positively need to have that QNAP look).
http://www.ebay.com.au/itm/USB-20x4-bay ... 33683eb302

by spitex
I am thinking about getting a LCD header for my one machine. That said, the other machine has 4x2.5" 1TB Hard drives in the same spot

German wrote:Why have you chosen usb instead of sata connection for the ssd, or am I missing something?

As per Ryans posts to go a 6th Sata drive plus the internal USB you need to connect to the external eSata portl.

With 5 Sata Drives connected internally (4 in the caddy and 1 off the mobo) the SSD now uses the internal USB port and acts as the OS.
by German
Ryan, is there any room left for an SSD after you put in the caddy for the 2.5" drives?
by Jnr_Zilla
Looking at Danny's post viewtopic.php?t=12474&postdays=0&postorder=asc&start=60

Edit: scroll to the pics he's got a 2.5in behind where the blue HP light goes. as that is empty space normally.
by spitex

German wrote:Ryan, is there any room left for an SSD after you put in the caddy for the 2.5" drives?

Without cutting metal, you can do ...

You will need an additional PCI-X SAS Card. I Ebayed this for $50 and needed a LP bracket - cost me another $9.

There is then space BELOW the ODD Bay for a 2.5" drive, via onboard SATA internal connector or USB. You could then also put 2 x 2.5" drives on top of the ODD bay if you really wanted also using the 2nd 4port SATA controller on the SAS card.

Here's splash's pic of the space below the ODD bay.

You will also need to buy the SAS->SATA Cable then, which cost US $12.88 and looks like:

To be totally honest with you.

Thats a saving of $240 on drives alone and doesn't require a $60 controller, $120 drive bay and cabling. Total saving, $400 for the same storage amount

.
by German
Hard to see(imagine) with the pics in google if what I want to do is possible.
by spitex

German wrote:Hard to see(imagine) with the pics in google if what I want to do is possible.

I'm thinking the 5th 3.5" HDD sits up high where the caddy goes?
by Jnr_Zilla
If you just going to use it as a NAS drop the SSD and use a usb thumb drive and that should fit. where you would put the SSD with all those extra drives is the sticking point and there won't be much room as you'll need the sas card in also.
by spitex

I'm thinking the 5th 3.5" HDD sits up high where the caddy goes?

It is doable if you CUT the metal UNDER the ODD bay, and slot it in there. Statts on OCAU has this setup completed. I have considered it but I don't have the tools to cut Metal. You can do this too